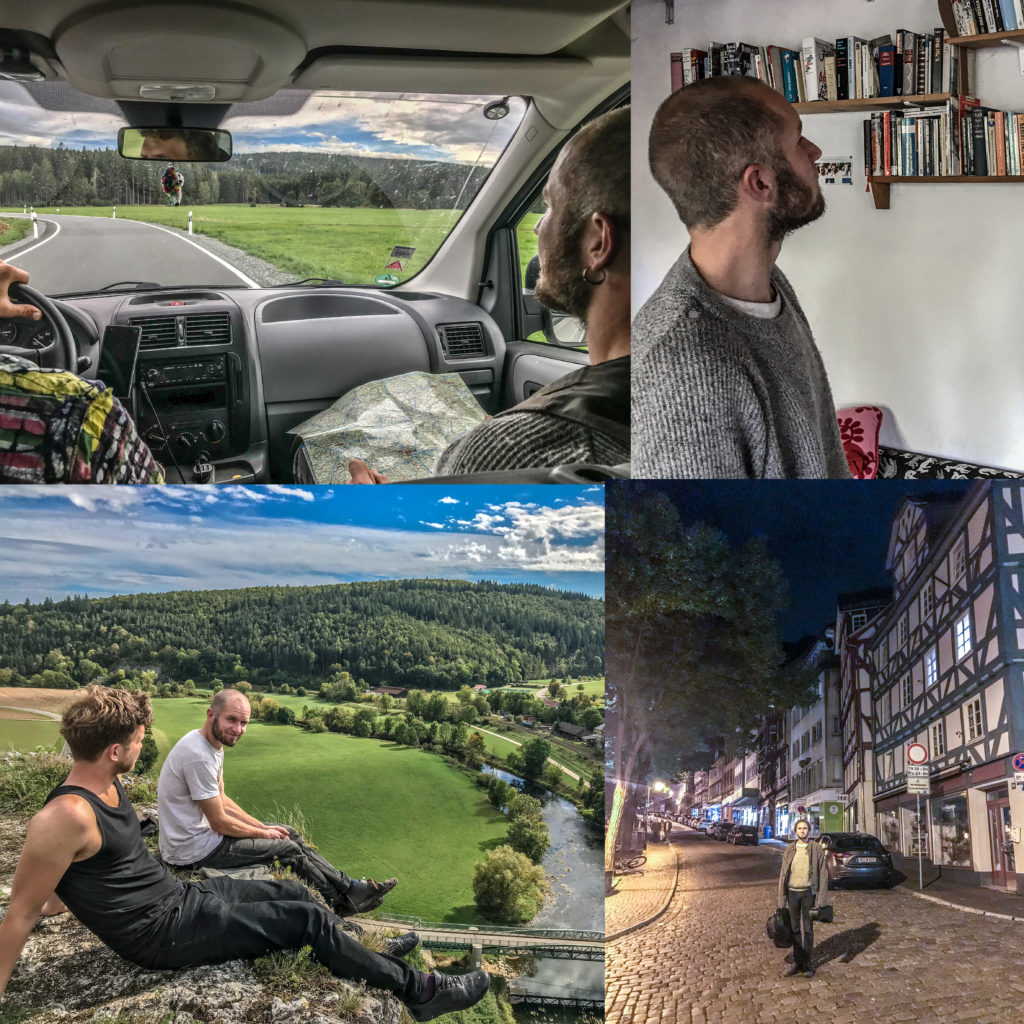 Once a year, in a cold night somewhere below the steep cliffs of the Baltic Sea, the band gathers for an ancient ritual to decide about their future. The rugs are unrolled and a little fire is lit. Benny fills his pipe, his glance wanders to the distance and he awaits the contact with his ancestors. Hendrik and Tim sit next to him and drink beer. After an hour or two, the crickets stop chirping, the fire flickers in unnatural colors and the air is filled with ghostly whispering. Benny has made contact with the ancients. He begins to talk in a long forgotten language and his body sways slowly. The whispers get louder. Tim nervously tries to roll a cigarette and Hendrik tensely sips his beer. Suddenly, the fire dies out and the whispers are gone. Everything is quiet, not even the sea dares to form a wave. “What have you been told, Benny?” asks Hendrik, “Where should we go next?”. Benny takes a long last puff with his pipe, opens his eyes and says: “Affalterbach”.
So we had our next target: Benny´s lovely hometown Affalterbach, somewhere in the Swabian south of Germany. Since Tim attended a logistics course during his coercive measures of the job center, he knew, that such a distance should not be traveled without stopovers. So Benny contacted some friends, pubs and local musicians self-help groups in south Germany to organize some travel-through concerts (by sending postcards from our merchandise, not joking). It worked out, we had few confirmations and a little tour was becoming reality. 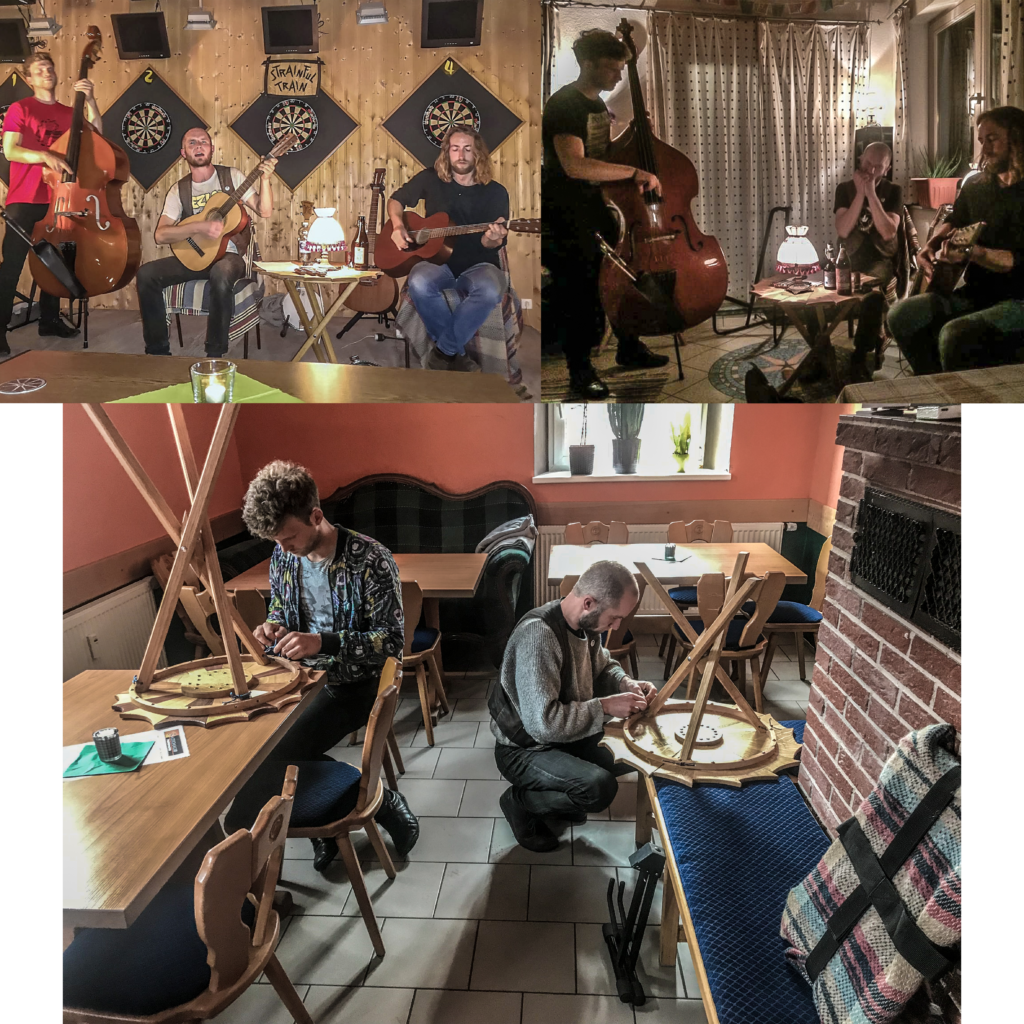 We had one week and three major goals:
1. Safely reach Affalterbach
2. Return with some adventure stories
3. Finally finish that bottle of pear schnapps we were given after a concert in Bosnia
We miserably failed. The Kruška is still not empty. But we had a great time and there are 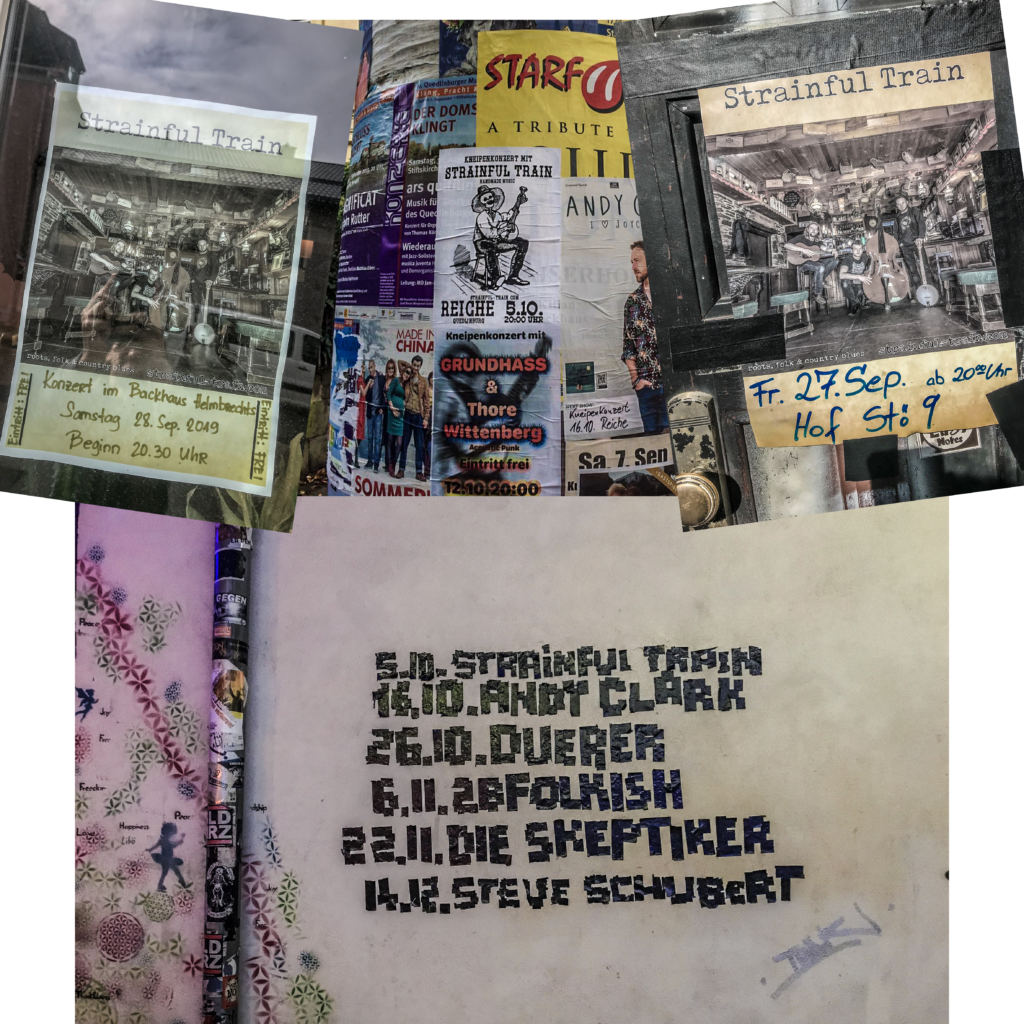 lots of stories to tell. I have to apologize, that I cannot recount them all. Most of them have been flushed away by the generous bartenders. But I still remember which people we ought to thank:
– thanks to the punks in that inner courtyard somewhere in the alternative district of Leipzig, who brought a professional mobile beer tap system, because they were afraid, the beer wouldn´t last. It didn’t last anyway
– thanks to that random slightly intoxicated guy in the pub in Helmbrechts, who yelled through the audience, our music has to be presented at the “friggin’ world exhibition”
– thanks to the barkeeper of the above mentioned bar (“Backhaus”), who even booked a super cosy hotel for us, which successfully refused to renew its furnishing for at least fifty years
– thanks to Rita and Thomas, who created a lavish feast exclusively produced on their own farm for us, which every prepper would be envious of
– thanks to Rudi and his girlfriend, for who we had to play our song “Beauty and the Beast” twice, as she stated, she could not live without that song anymore
– thanks to Can of the site trailer pub, who blankly answered to the question, where we could get electricity on the stage, with “I thought you played unplugged. There are no sockets in this pub”. The electricity was just for Benny’s bedside lamp, which he needs to tell apart his harmonicas. And thanks for the candles 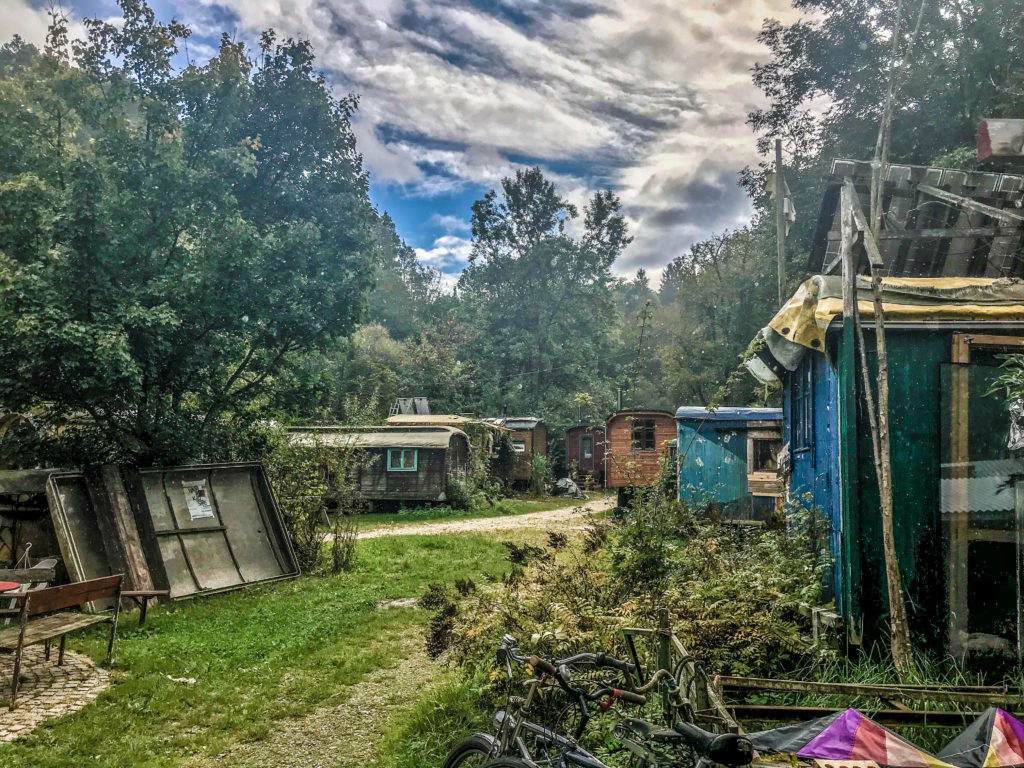 – thanks to the dear people of Affalterbach and especially that one drunk friend of Benny, who confidentially told Tim, that if anybody speaks bad about Benny, he will BEAT THE LIVING DAYLIGHT OUT OF HIM
– thanks to the shady journalist, who promised after our concert, that he would bring us up in the “Marbacher Zeitung”, asked a few questions about Benny and then skipped out of his tap
– thanks to Alex, who we had to help to clear the dancefloor of the passed out people, after we shared the stage with three punk bands
– and thanks to everybody I forgot to mention and to the ones who are still reading this. We are still working on the new album, it is going to be brilliant, stay tuned!