Some of you may remember: Strainful Train was lying in despair, looking for a meaning, like Sauron for his ring. We decided, that the best way of regaining the joy of life would be at the source of joy itself:
Egan’s Bar in Liscannor. We returned to Sean’s care to have another wonderful concert and subsequent excessive beer tasting. It worked, our journey had a meaning again. 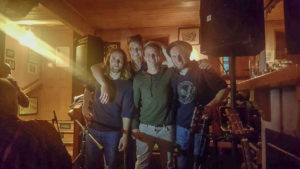 (Danke-Sean! And thanks to the landlord Patrick!) Head first we started touring again. The Roadside Tavern in Lisdoonvarna, a very original pub hosted us for the next night, we had a superb concert there. First of all because Brian, the gifted percussionist, supported us. And second because Sean was cheering from the audience.

At this point I have to mention that our beloved home and ride was left horribly deserted most of our time in Ireland. We simply never had to sleep in the van. Thanks to a remarkable Irishman called Ronan. We played in his Hotel and he provided us hostel rooms in every possible location of this world. Also in Lisdoonvarna.
The next day we also transformed Brians place to a little recording studio, to take his tight rhythm vibes with us on our album. 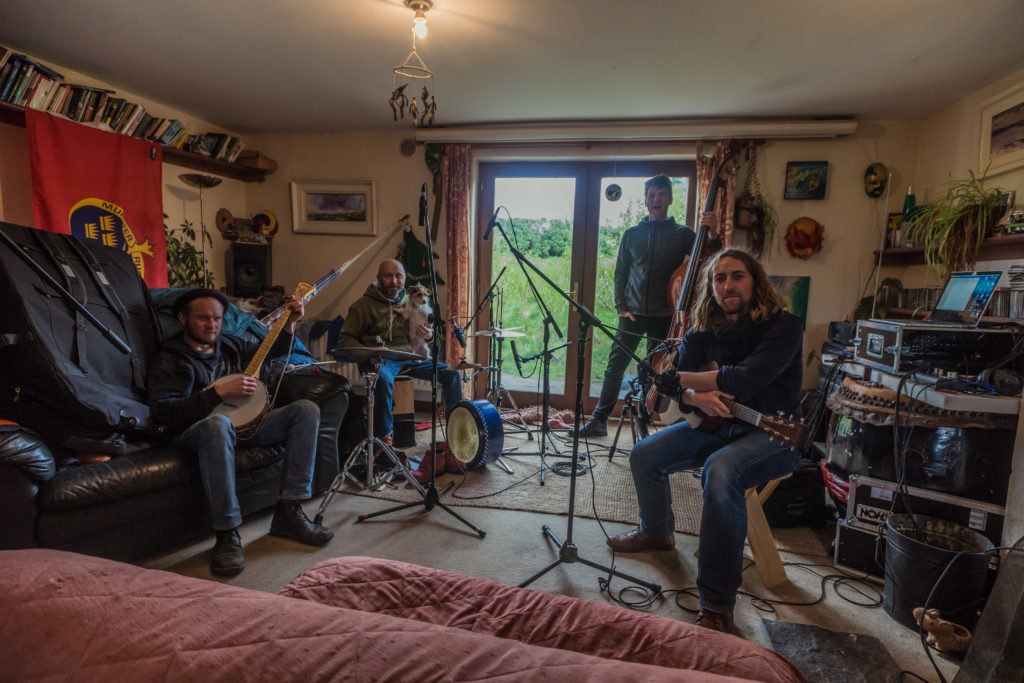 Unfortunately, the obligations of our real lives in Germany started to manifest at the horizon, so we sadly started our journey home. Therefore we had to cross the midlands again, the wretched place everybody at the west coast warned us about. Wrongfully, as we already had found out. We headed to Newbridge, where our irish adventures began. At the west coast we already had the luck to partake in several traditional pub sessions. The one we joined that night in Newbridge with Lucy and Niecy was somehow special, it was the most euphoric and chaotic one. You barely understood, what the musicians on the other side of the table were playing, but you jumped in anyways, to contribute your solo to the sound ball. 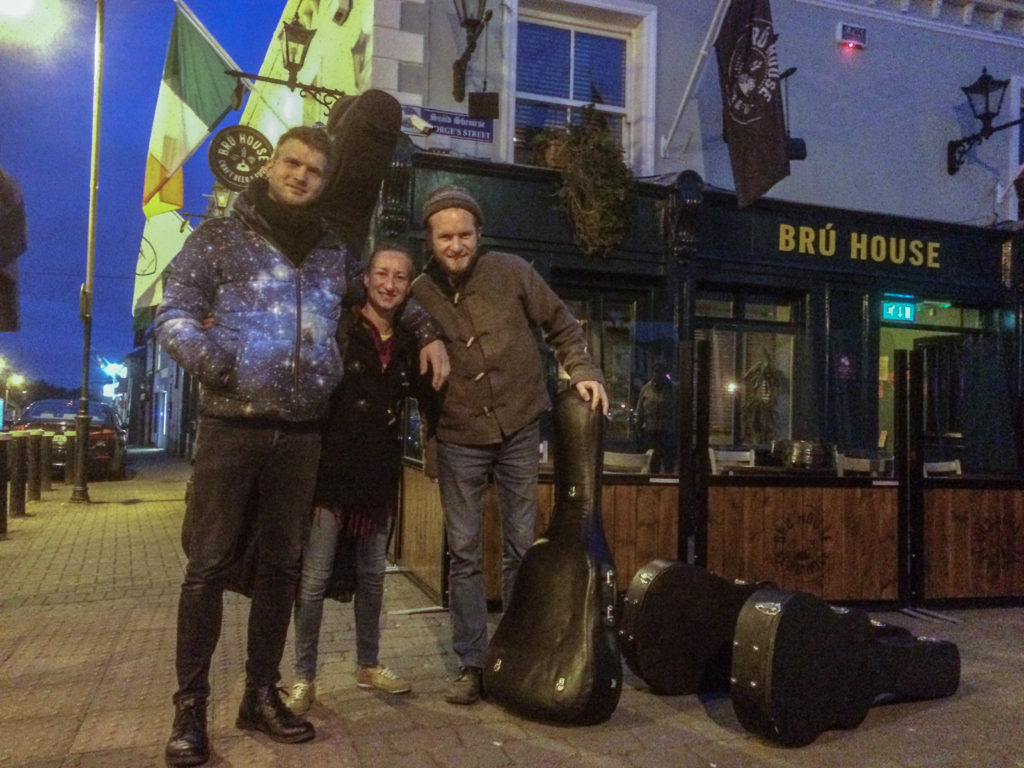 The following night should become the complete opposite. Our dear friend and supporter Deidre organized a slot us at a concert series called “Ciúnas” (irish for Silence). A nice concept, where people really only come to listen. The audience was so disciplined; you could hear a needle pin falling. That puts quite a pressure on you, when you are used to hide your little technical difficulties behind the always present bar noise. Still an awesome concert, though. The next morning at seven, our ferry to Wales was going to leave from Dublin. We drove through the night, were able to get a 2 hour nap right in front of the check in lines and arrived early and sleep-deprived in Holyhead. We weren’t quite sure what to do with this full day ahead of us, so we climbed on a mountain. 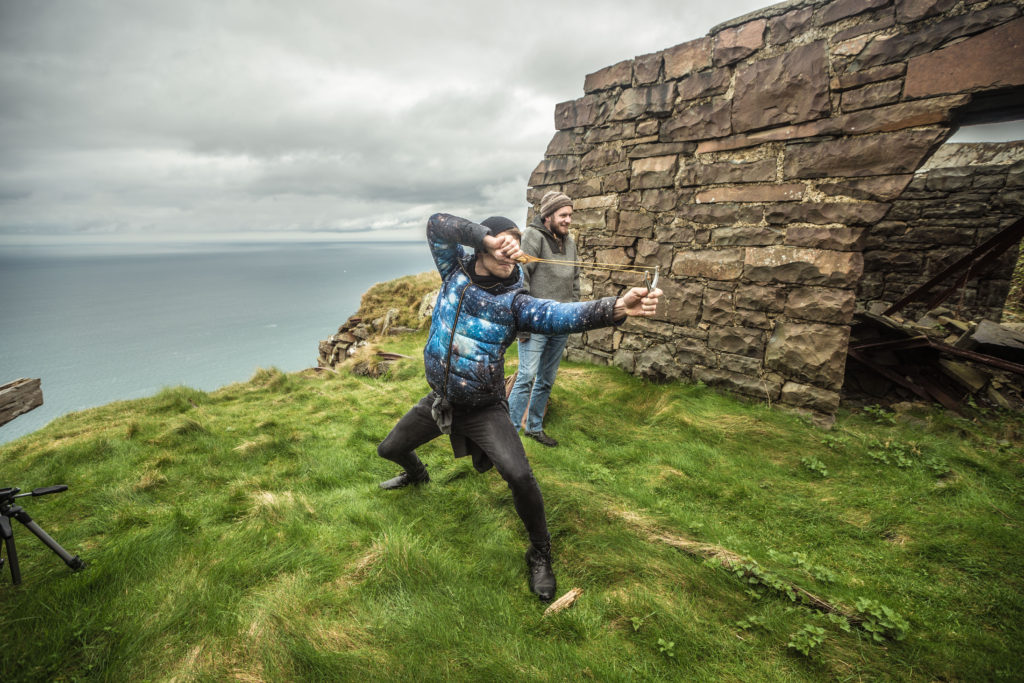 It started raining on the top, we lost many good men up there. So now we were tired AND exhausted. Those were the perfect preconditions to fall into the strong arms of our friend and center of our Welsh comfort zone, Scott. Sadly we just stayed briefly, there was a concert in Bishopscastle we had to support. The venue, “the Vaults” is a prototype of a rough countryside pub, a place I wish I had in my hometown. The owner, Wayne the Viking, has an intimidating biker-appearance but a warm and soft heart for roots music. He instantly invited us to his Blues Festival next year, see you there, Wayne!
We spent the night at Rob’s farm. Rob is a brilliant harmonica player and his farm is one another little paradise we encountered during our tour. Fat wool sheep are strolling around his house in the Welsh mountains, and bred sprouts are swimming in the pond at the driveway. 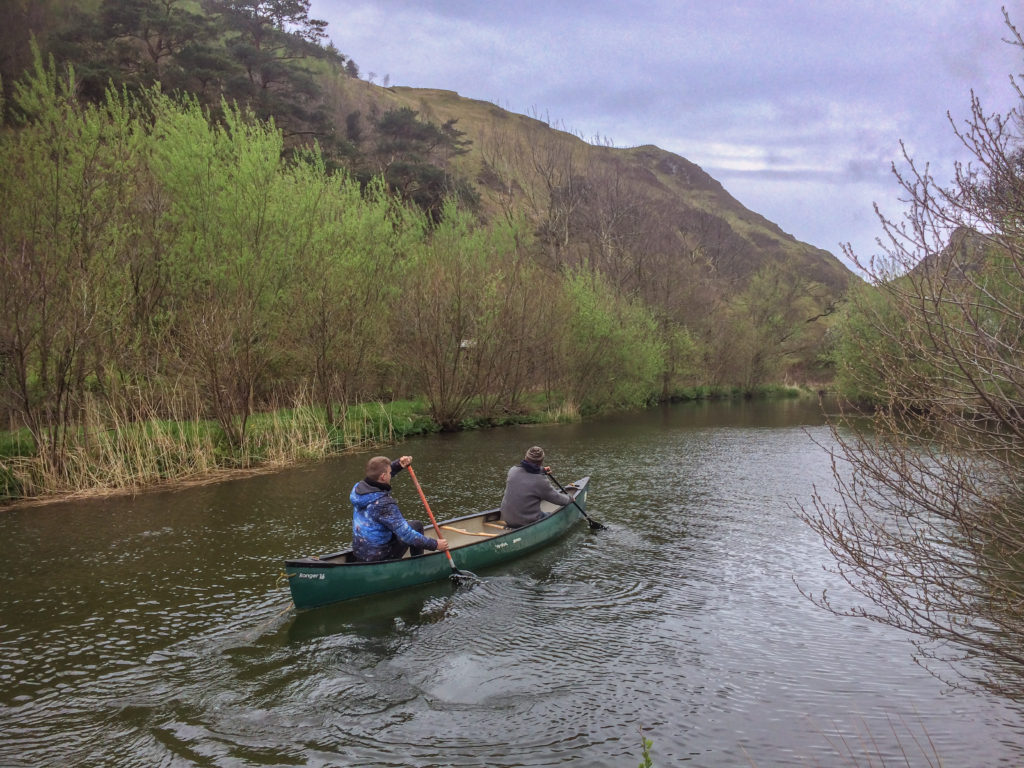 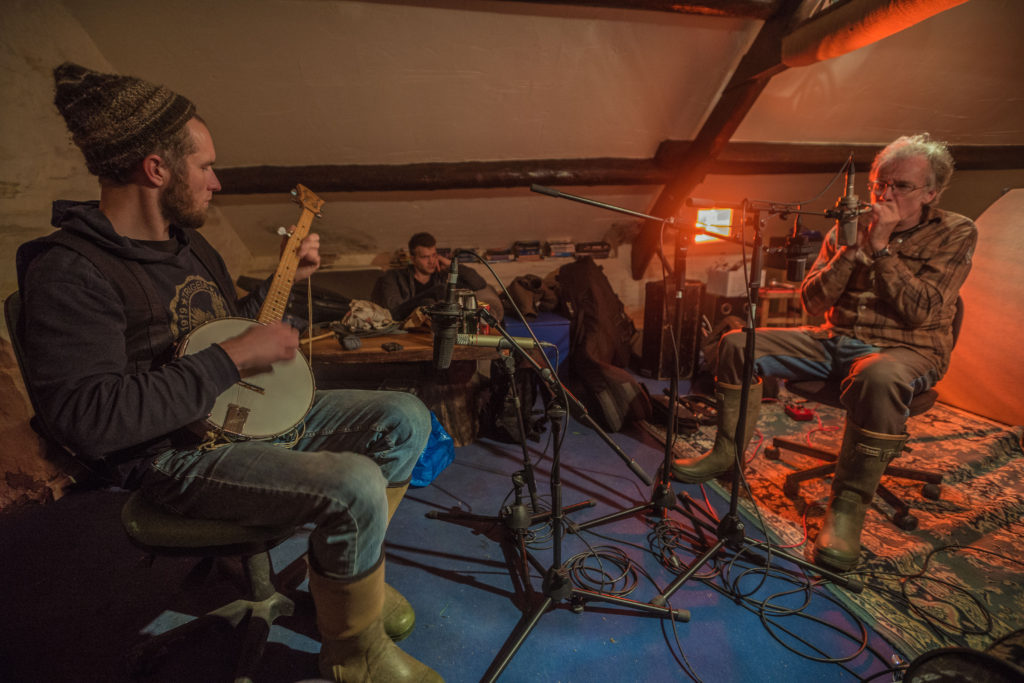 He and his lovely partner Ingrid made us feel so welcome there, that we stayed for another day. Your own doing!
Heavy hearted we are now leaving these beautiful islands and head for the big mainland to master the last two weeks our tour. 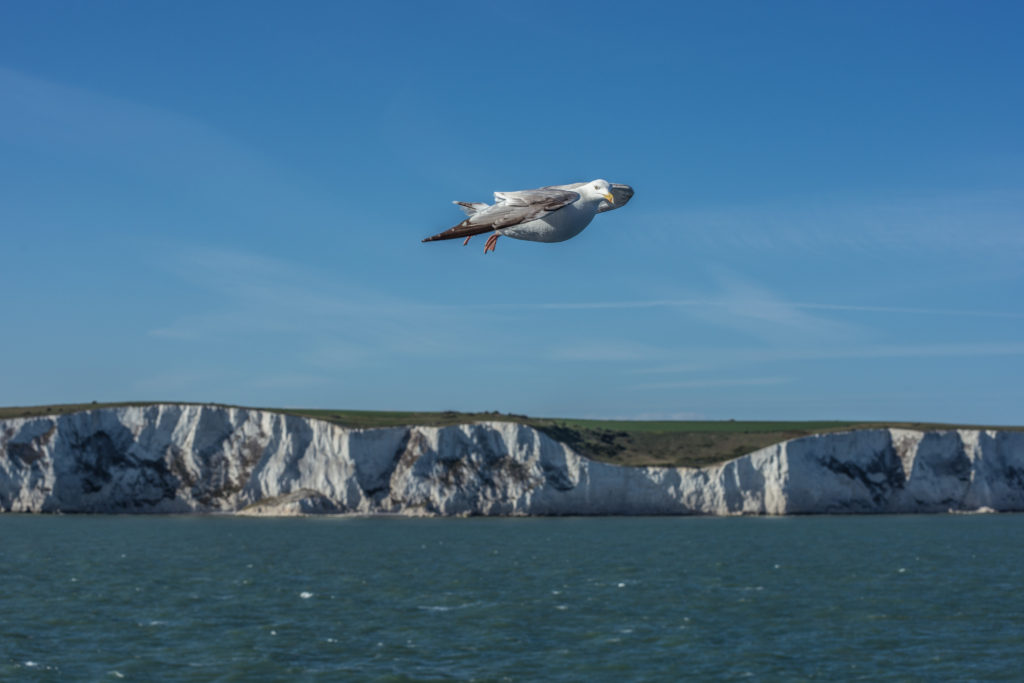 The idea of a daily post in our blog was not only very ambitious it was also very naïve. First of all, I am lazy as f*** and second, there is not much to write about; the times have calmed. While there were escapades and adventures every full hour at the beginning of the tour, we settled by now for a quiet live between tea mugs and heated blankets. Most of the times it is quiet. The only disturbance of the silence if coming from Benni in his wing chair. His knees covered with a stuffy blanket, he is asking for an Austrian Canton with nine letters for his crossword puzzle without expecting an answer. Hendrik is puffing his pipe while staring in the fireplace with glassy eyes. The daily highlight is the evening tea, where we are looking at last month’s photos and indulge in reminiscences. Except Tim, his memory has faded and was washed away by one too many pints, so that he is only sitting in the corner, playing with dough and babbling something about the red power ranger. How did it get so far?
Last week’s center of our attention was county Clare at the west coast of Ireland, Homeland of the Cliffs of Moher. Not far from those, there is a little musician’s sanctuary called “Egan’s”. This pub, in my humble opinion, is the best place on earth. 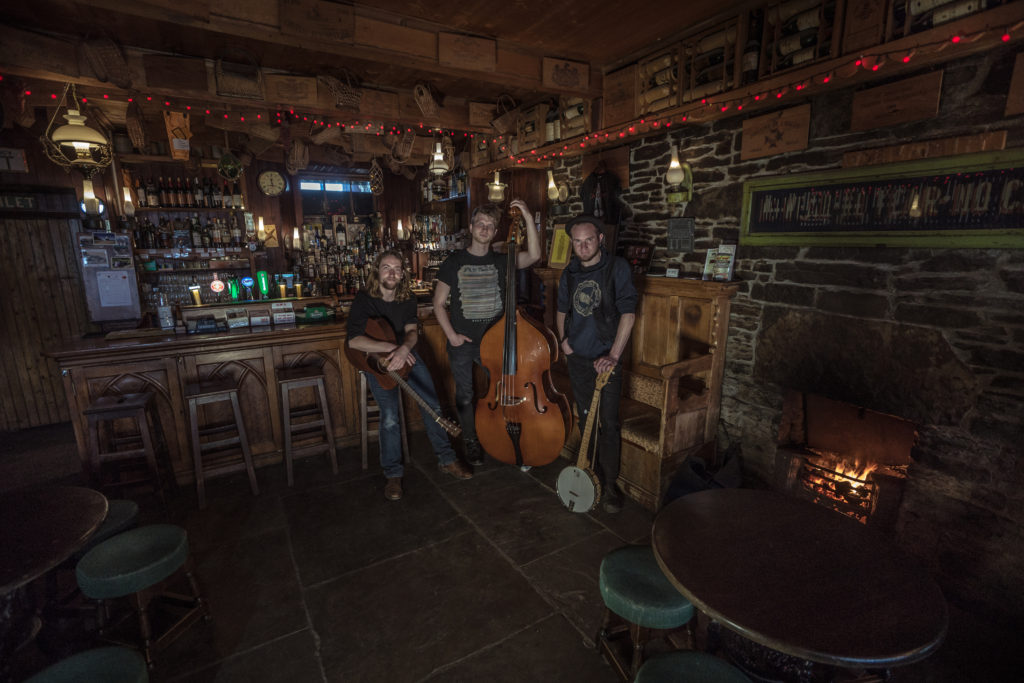 When I am lying in my death bed, breathing my final breaths, somebody should drag me out of there, fly me to Clare (if I am not already there), place me at Egan’s bar and shove me a pint in my hand. I hereby kindly ask the barkeeper Sean to excuse in advance the inconvenience caused by a dead body. Speaking of Sean: this guy deserves a medal. He knew us for about twenty seconds and already offered us his place to stay at. We happily accepted his offer. And stayed for the whole week. Thanks Sean! His place became the headquarters for our new quest to play at every pub in Lahinch, the surfer’s paradise around the corner. Yes people go surfing at the Irish coast. 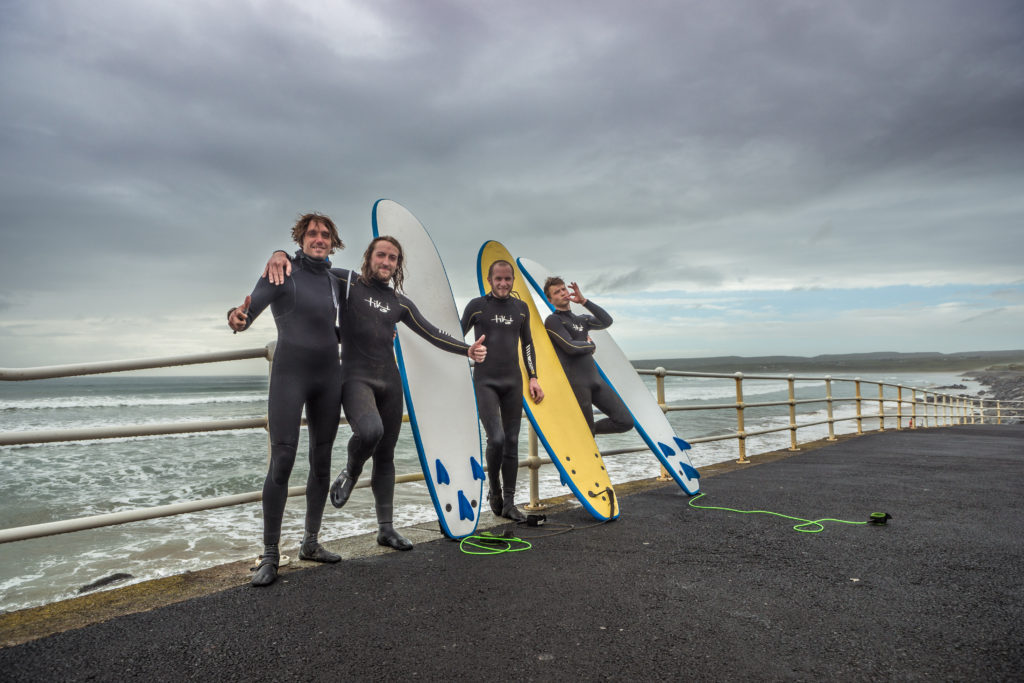 Even though Lahinch is just a village, the high Irish pub-per-capita ratio leads to solid three bars in the main street. And we were victorious, all of them can consider themselves as strainfully trained now.
On our thirst for success we headed to Galway to challenge ourselves with a new way of raising the band budget: busking. (Street musicians are a common view there. Which means, that there is also a hard competition for the busiest spots. All you fully amplified chart cover interpreters who defile hundreds of meters of bar street with trash pop, I hope you read this and feel ashamed.) The outcome was mediocre. The weather was unsteady, but the people generous. The local party scene proved to be too distressing for us, our worn out bodies demanded some rest. And we found it. We were invited to Denise’s place in Donegal, five hours to the north. Denise is a superb and passionate fiddle player. After we nearly killed our beloved ride on the narrow path up the hills to her house, we transformed her crib to a roots music-recording studio. Including authentic farmhouse reverb. 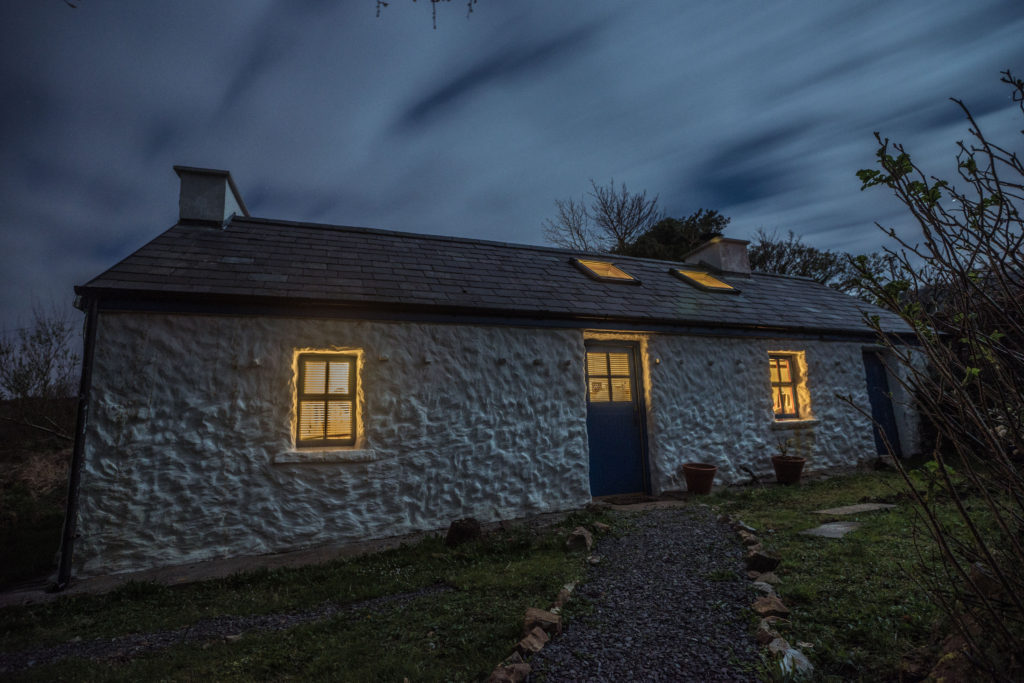 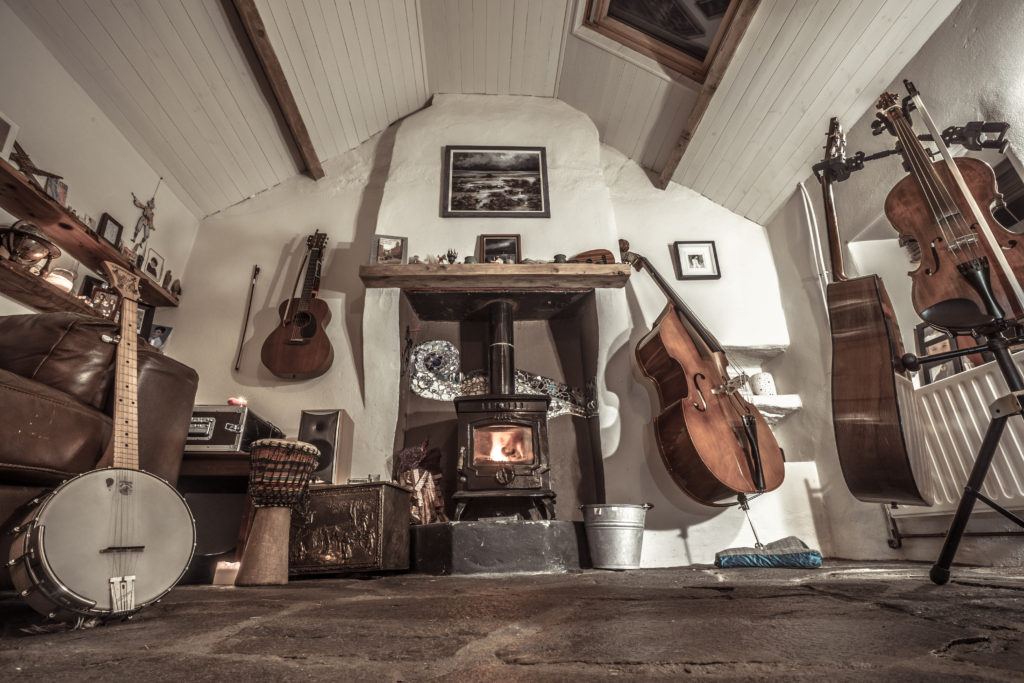 We recorded two full days. The fiddle amidst us was magical. We created masterpieces and listened to the recordings over and over again. 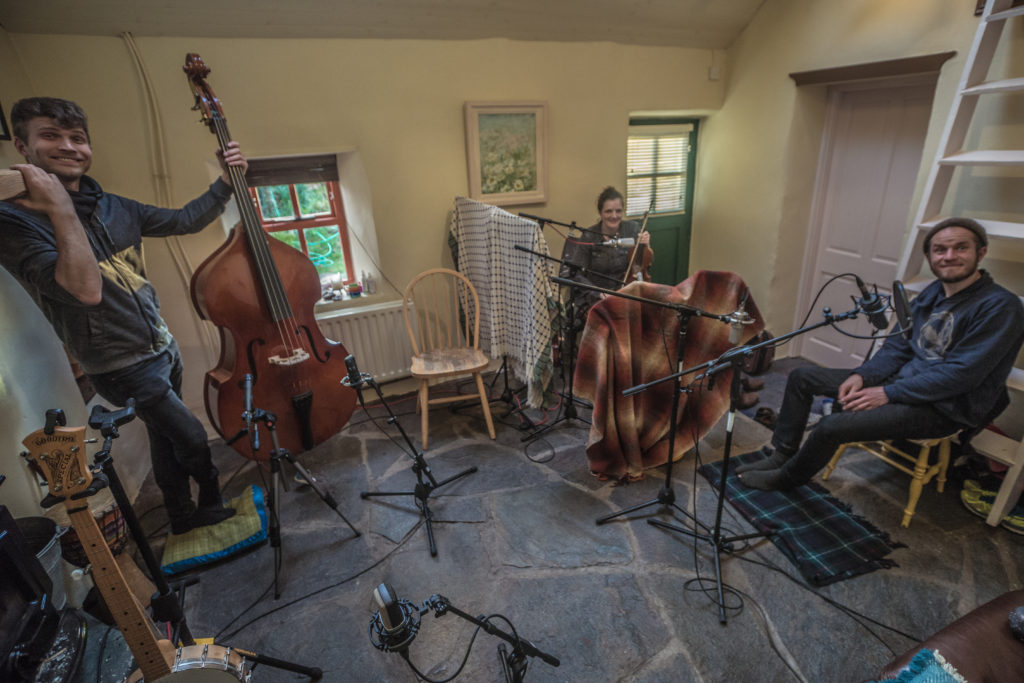 And suddenly Denise left. She left a void behind. We were paralyzed, the spirit was gone and we fell in lethargy. So here we are now, still in Denise’s house, watching our bodies decay and our memories fade. Will we ever recover from our loss? Stay tuned!