Strainful Train left the EU for the first time. We felt properly prepared, our vaccinations were up to date, we had plenty of fresh water in the mothership and we had Benni, an ex-Yugoslav with exceptional survival skills with us. 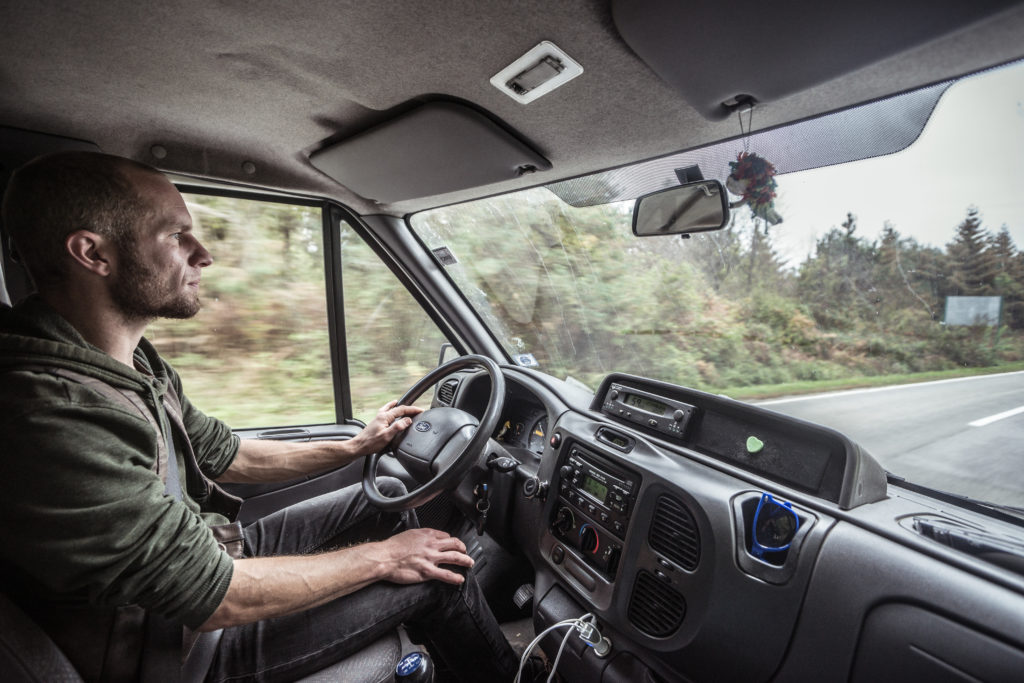 But when the border patrol scrutinized us grimly and lifted the barrier to the wasteland the media already warned us about, we were sobered. Everything was the same, just the Burek tasted better. And the people were extremely welcoming. 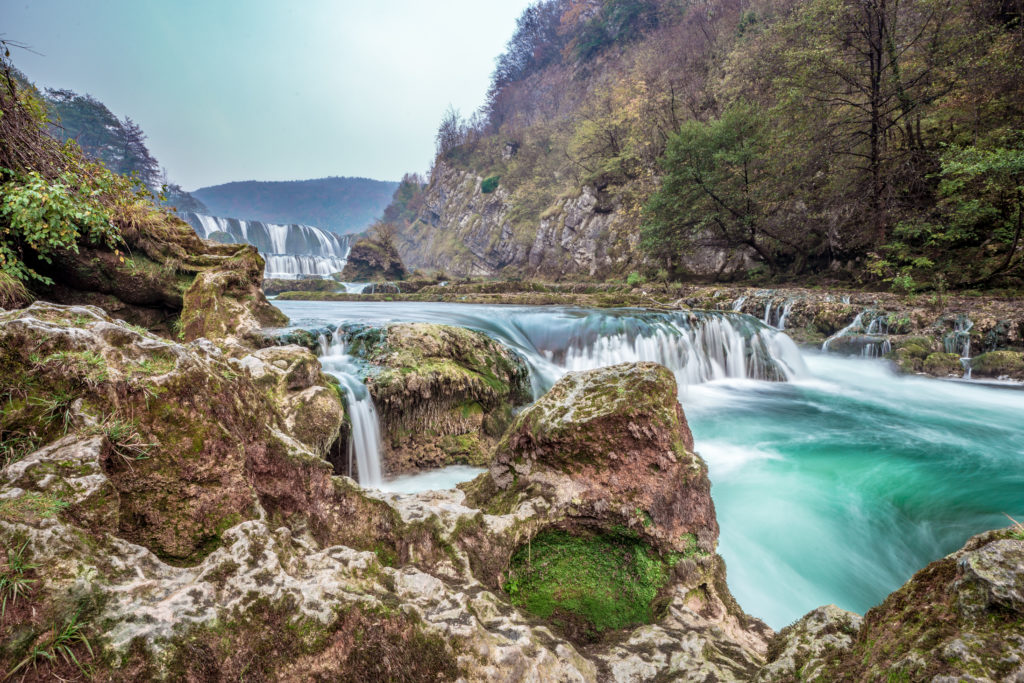 When we made recreational stop at the Una national park, a local called Suad invited us to stay in his yard. His English vocabulary only contained two and a half words, but he managed to inform us about his whole family, the current political situation, the water quality in the national park and shared a few cooking recipes and his home distilled schnapps with us.
We moved on, through astonishingly beautiful valleys, forests and Balkan style beehive cities and ended up in the incredible Mostar. 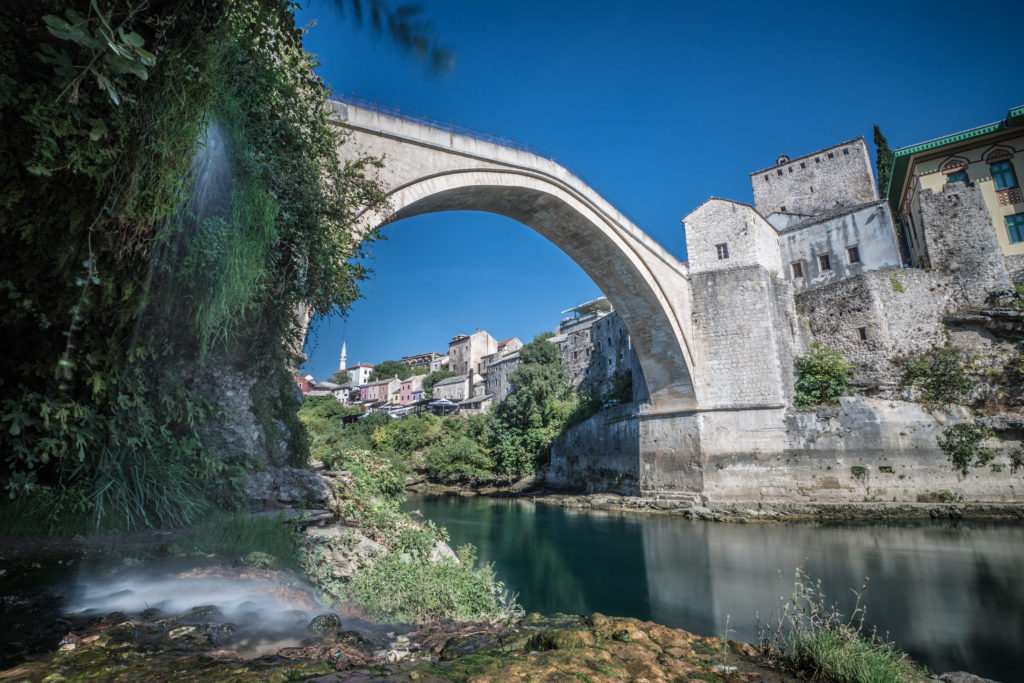 You barely will find a more picturesque place, even though everything is covered with bullet holes and marks of explosions. Hendrik used this scenery to make an hours long photo shoot with our rough and natural band model Benni, I’ll ask him to put some of his master works here. We played a booked out late night gig in the coco loco, a hip pub with an incredibly nice owner, who even organized a cozy soviet style flat for us. 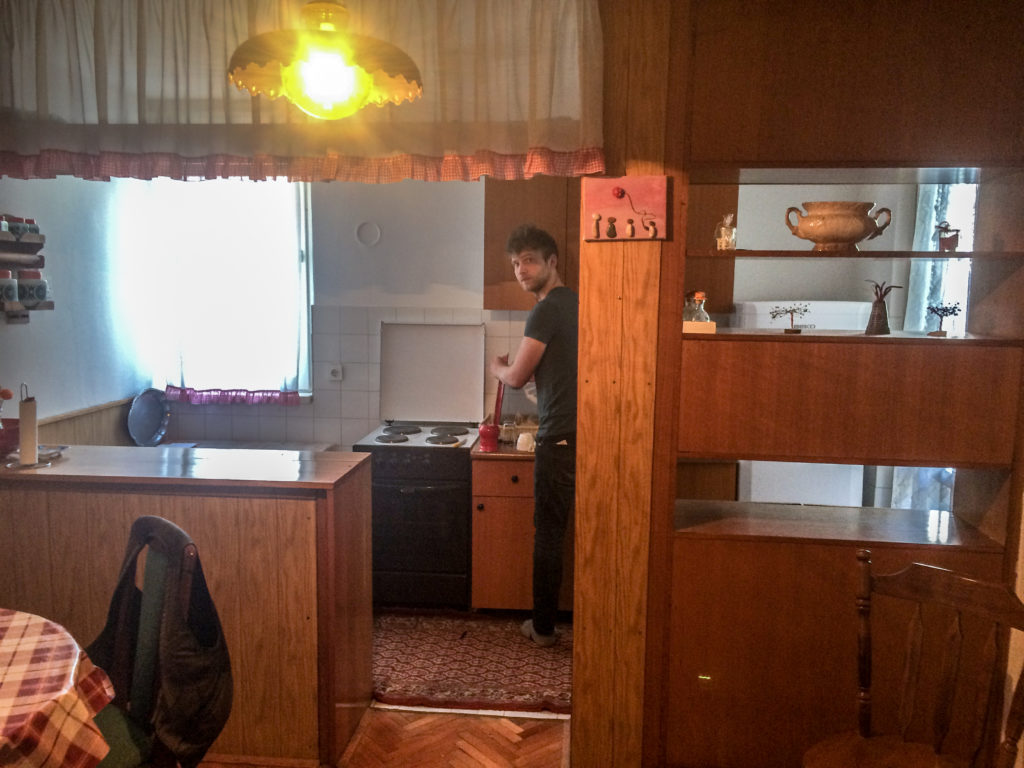 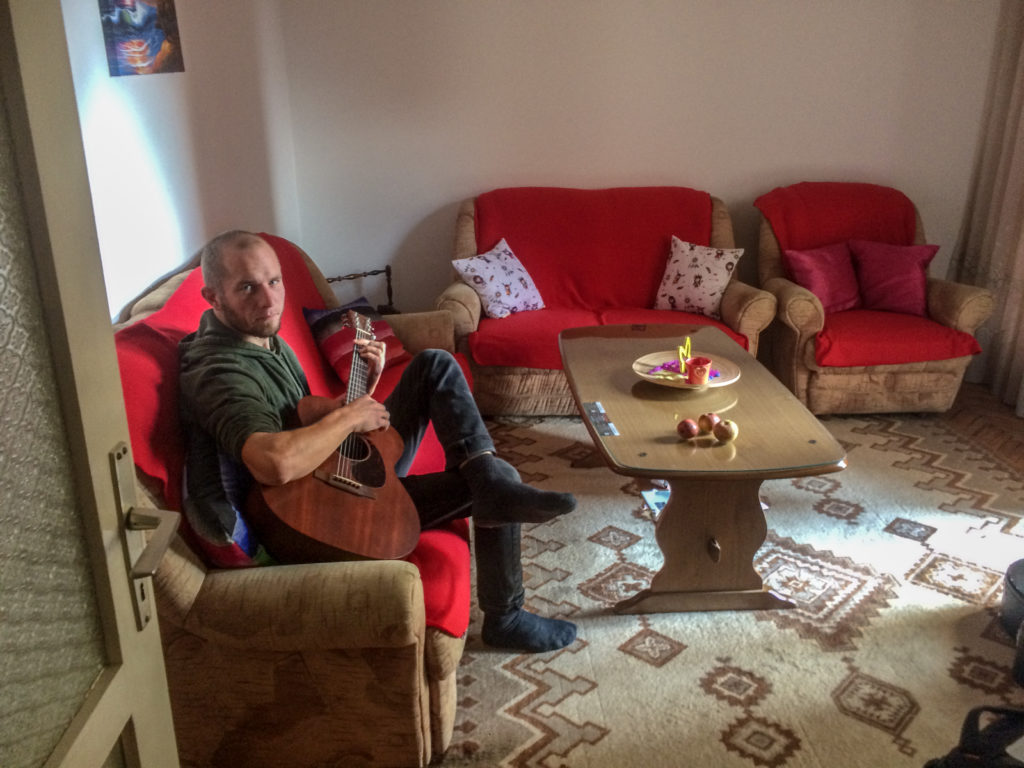 So, well rested and refilled with Burek, we hit the road again, to leave this overwhelming country, there were still some gigs in Croatia ahead of us.

When you have never driven down the Dalmatian coastline of Croatia, then stop reading right now, grab your jacket and your car keys and get going! The drool was already drying at our chins, since we were not able to close our mouths in awe. This was the place, where our prophet Benni spent three months of his life to bring joy to the people and repair wooden boats. Our host for the next concert in Makarska, Igor, was a chilled dude and seemed to be the godfather of the whole town. 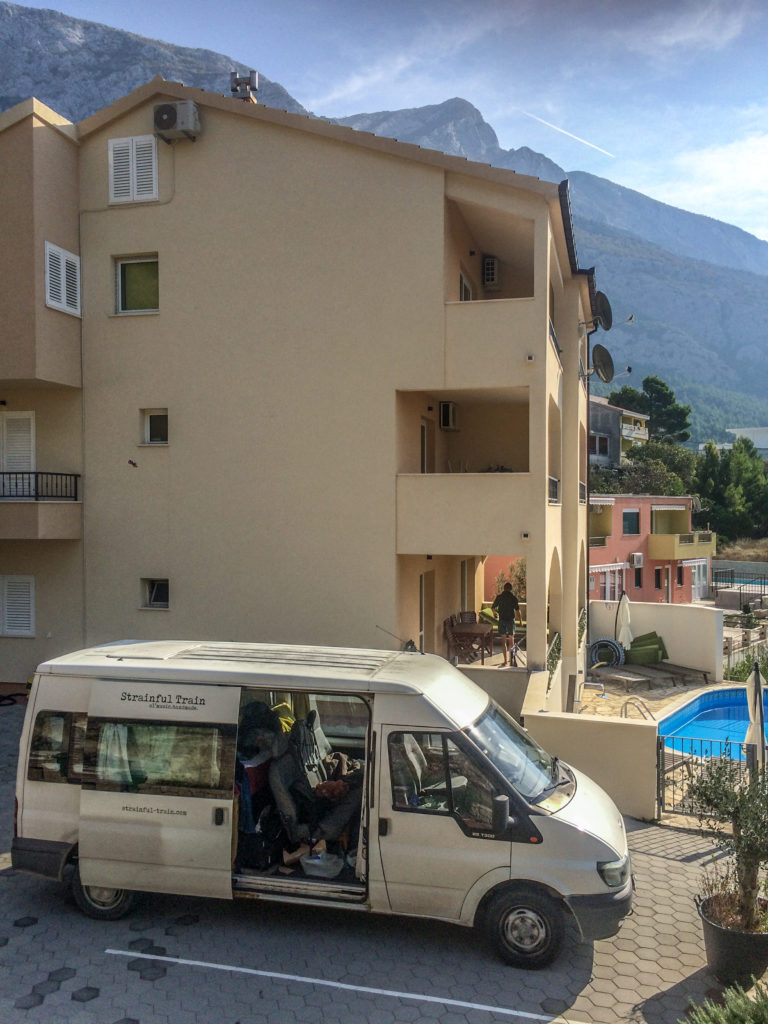 It was the first time, when Benni

was able to drop his daddy role for the band for once, since Igor had this role now. We walked under his protection, were fed like aristocrats, were served the finest craft beer and 24 years old rum and lived in his sea view villa at the hillside. Even though we wished to stay forever, we had to move on to our final station of the tour, the small harbor town Omiš. 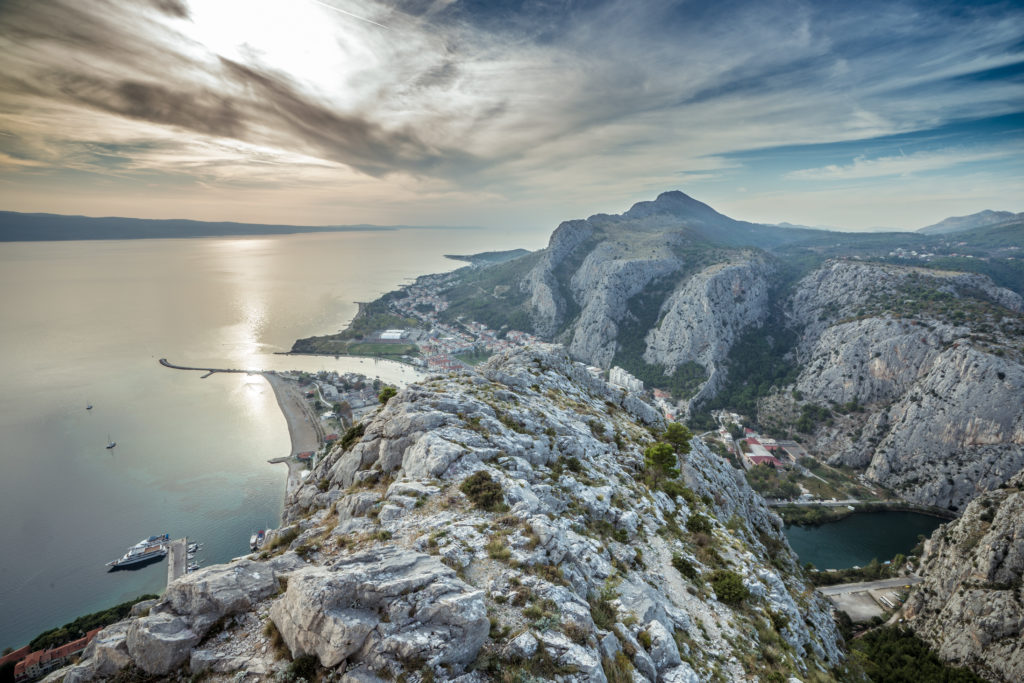 The LIX is a local bar there, where Benni already wasted way to many nights during his prophetic stay. It had an alternative appeal and the nicest guests of the whole coast, everyone of them seemed to be bartending in the LIX now and then. We really see these people as friends now, the gig there was awesome and had the flair of a football game. Many hugs, a swim in the Adria and some mountain treks later, we sit in our mothership again. With empty pockets but many new adventure stories to tell, we head back to Germany. And the lust for the next Strainful Train Quest already arises, stay tuned! 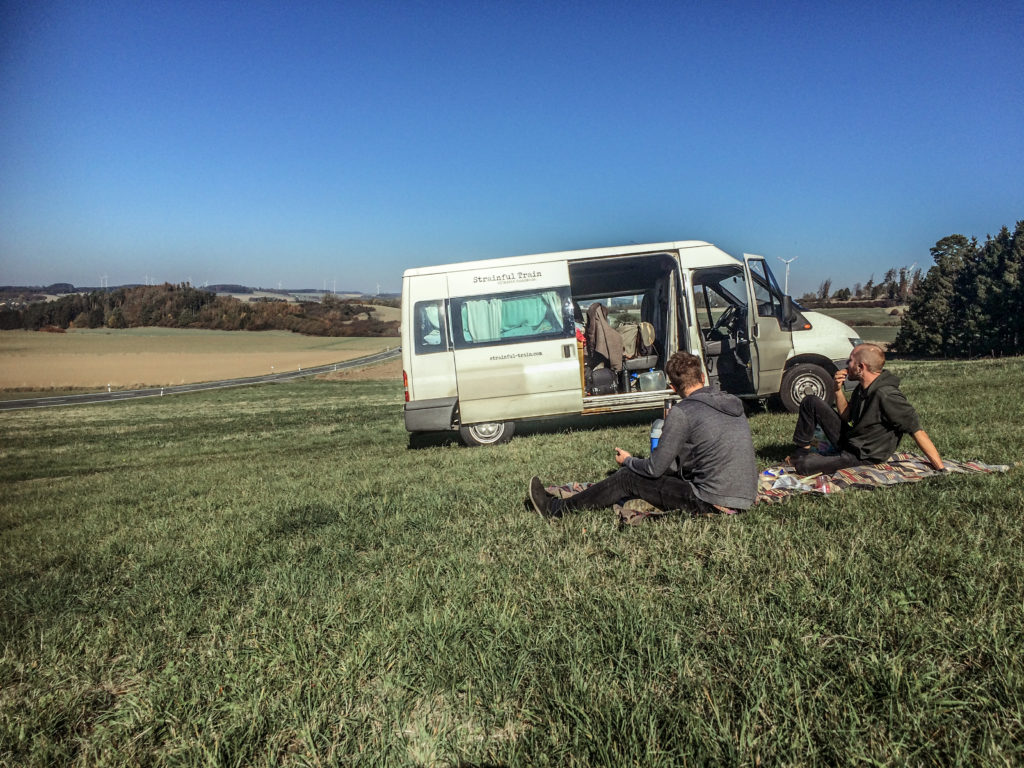 Once in a year we gather our tight resources, wrap the toothbrushes in the travel towels and give goodbye kisses to our families. It is time to jump once more into the gypsie lifestyle of Strainful Train on tour. Hide your beer and hide your wifes, the folk trio is out for conquest again. Provided that our livers play along and the rusty ride doesn’t break down. Which is quite probable, considering the Bosnian road conditions and Bennis urge for miraculously surviving overtaking Russian tractors on steep slopes. As you see, our annual escape route from everyday routine led us to the Balkan. Benny still had some neat contacts there from his journeyman years. Or as we call it, the time where the prophet walked amongst us. He is still being considered a guru by the locals. But I´ll get to that.
On our conquest to the south east we stopped over in Vienna. For sleeping reasons. Also there was another squatted place to play at. The EKH has a bar in the basement that hosts punk festivals and looks like a fetish club. Our concert was adjoined with the showing of a disturbing info flick about the first queer squatting project in Berlin. We made the best of it and even mastered some small talk in Austrian German afterwards. After a refreshing stay over at the official band quarters, there was no time to loose, Zagreb was calling.

The main reason, we headed to the Balkan, was a little greasy pastry, that tastes only when made by the wrinkled hands of a Bosnian grandmother. It is called “Burek” and the overconsumption leads to instant obesity. Meanwhile everyone in the band is the proud owner of a “Burek-Bauch”. We satisfied our Burek-needs and were properly prepared for a concert in the next squatted place. 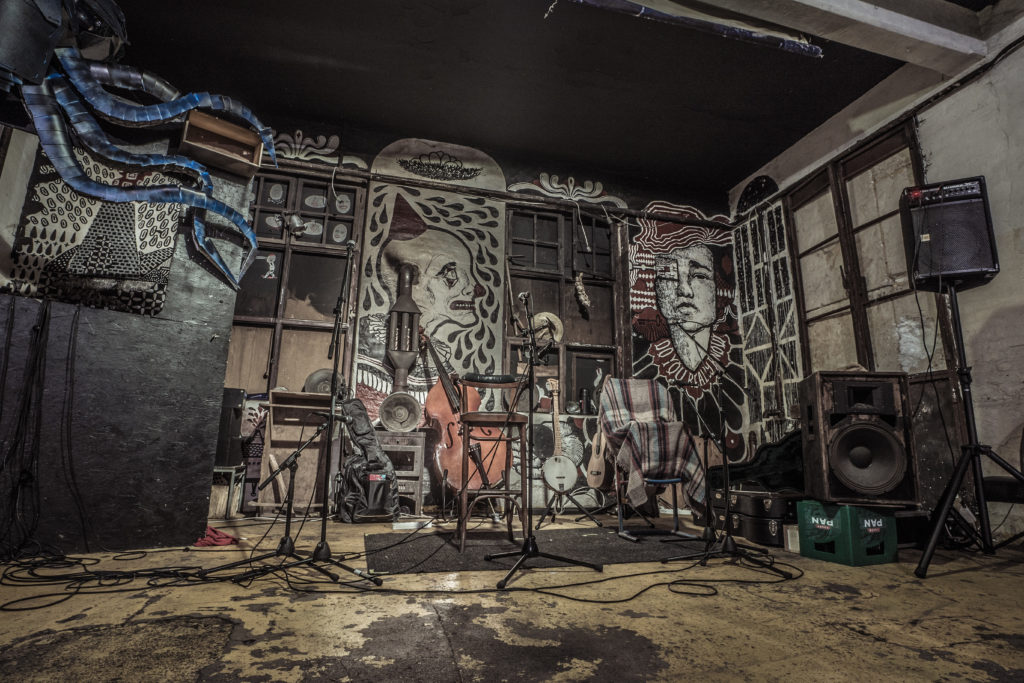 The “medica” and namely Marin, a sympatic extrovert with a kazoo, hosted an event to honor our guru and called it “the fight of the journeyman”. It featured four bands and Benni was the headliner. This really was his show, since the sound system showed some technical difficulties (for readers interested in audio gear: the mixer had an earthing fault and produced intense reverb from hell as soon as you touched it), and Bennis microphones were the only ones working. He showed all the entertainer skills slumbering within him. Successfully, he even provoked a jesse-james-moshpit. There were several parties at the venue afterwards, so the night for Benni-and-band ended somewhere between dark psy tech and Balkan-Oldies.
The sheer opposite of that night, sound and audience wise, was to follow the next day. We had an appointment at the local cultural hot spot Kulturni Centar Mesnička, as the follow up of the reading of a Croatian poet. The sound was exquisitely mixed by Mr. K. Kar, the audience was seated like during an opera and on the second half of the gig, a talented jazz drummer with the over masculine name of BORKO joined in. It was a delightful evening, even though we had trouble with the park house staff, who did not believe that our flagship is below 2,30m. (the papers say, its 2,295m, it must have been warning sign, that was hanging too low.) 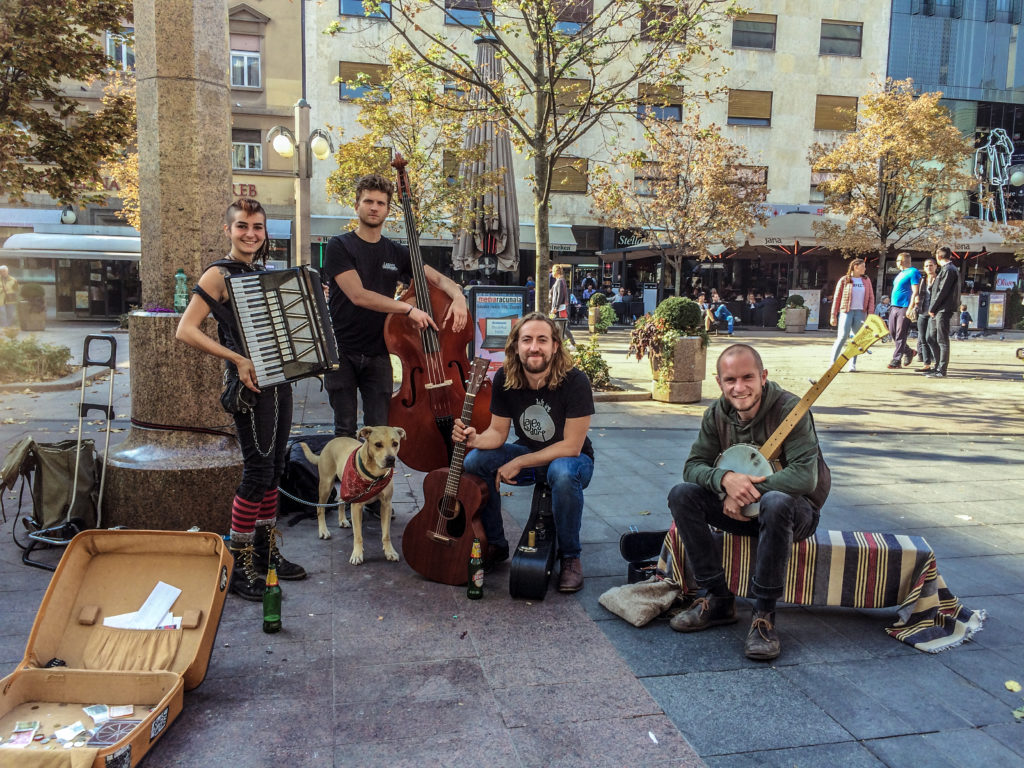 To get grounded again, we did some serious busking on the streets of Zagreb the following day. A cute Canadian accordion player joined us and doubled the income with some upbeat gypsie vibes.

Which was directly converted into burek.

We needed a rest and found it in the warm lap of Matea and Jure. In their little sanctuary garden in the middle of the city, Benni was able to rebalance his spiritual energies by grilling some chestnuts. The Bosnian hinterlands were awaiting us and we needed to be clear and ready for the thrilling adventures ahead.
Part II of the Balkan adventures is coming soon…