It was a personal wish of the band to visit Offenburg during the tour. That had two reasons. First, Offenburg’s city abbreviation is “OG”, which in our ghetto clique is synonymous with “original gangster”, so a visit to Offenburg contributes to street credibility. In addition, Benni had spent a few wonderful days during his journeying time with the carpenter Sylvia, who had settled in Offenburg. She gave us the use of her courtyard so we could mix up the neighborhood a little bit. During the pandemic, the official regional cultural sites did not want to get involved in a live concert. But the courtyard concert was well received. People made themselves comfortable on balconies and benches and refused to call the police.

Until now, the band management (Mr. Burek himself) had already shown an enormous performance.

In view of the pandemic it was almost impossible to get firm commitments for official concerts. Nevertheless, he persistently called people, organized semi-legal stages and kept the band happy with beer and cheese rolls. On day six of our trip, the time had finally come: the first official concert, with a hygiene concept and list of participants was on the agenda. Renate and Jochen Braun in Rottweil, operators of the “àkapella” cultural café and themselves music nerds, gathered the city’s most exquisite audience for us. So 20 people of the Blues-Folk-Elite of Rottweil sat there with a safety distance of 1,5m and a ticket price of 18€. Never before such a high price was paid for us, so we wanted to offer something decent. Benny withdrew to the back rooms of the café and wrote our setlist. A two hour dramaturgical masterpiece, which marathon live performer Bruce Springsteen would have been proud of. We played our fingers to the bone until Tim’s bladder didn’t allow another encore.

And during the whole concert this highly concentrated audience sat there, looking at us 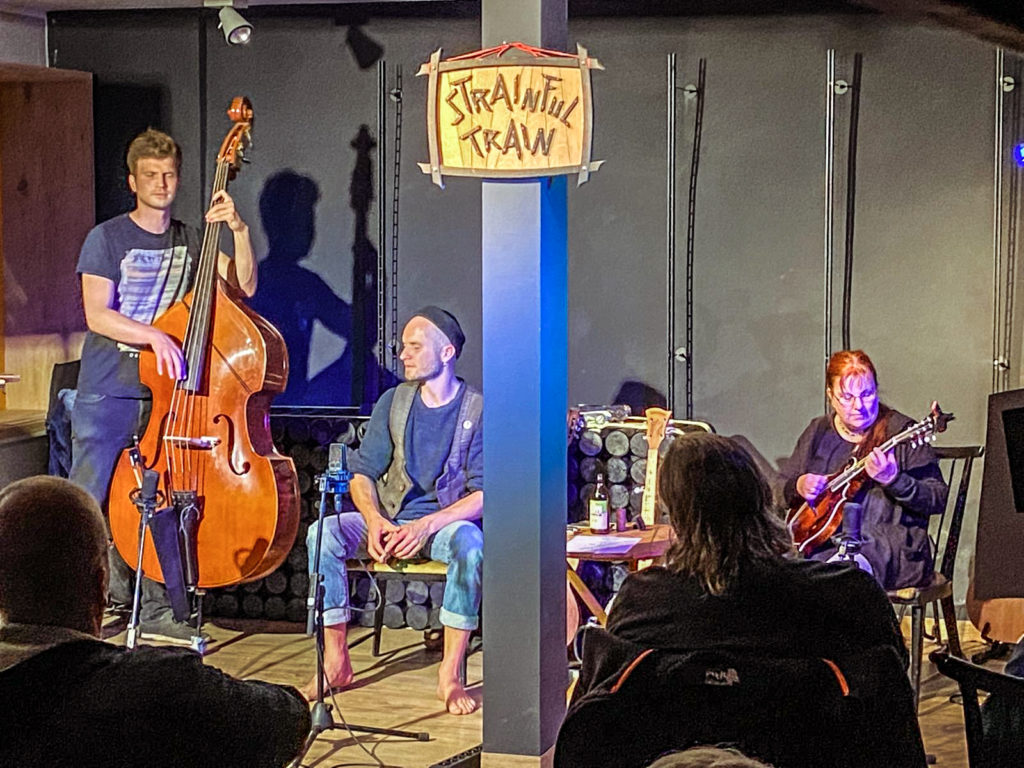 critically, only to give enthusiastic applause shortly after the last note was played. We had to drink away such a high level of professionalism. And thank you so much Kerstin for joining us for a couple of songs.

The following day provided the opportunity to do so. For Benny a home game was coming up. Not far from his home town Affalterbach, in Backnang-Mittelschöntal, an organic farm runs a cafe. In a fulminant outdoor event, the summer season was to be concluded there with bread on a stick and a live concert. From a weather point of view, we had been truly blessed this week. 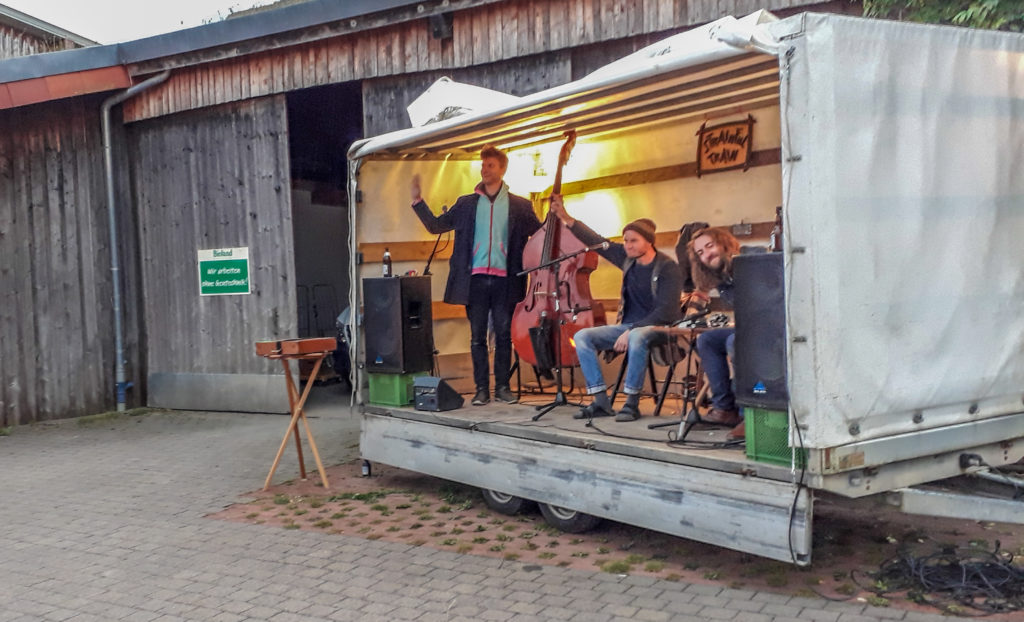 Usually we layed in our T-shirts on the meadows after the concerts and counted shooting stars. That evening we had to distribute all our clothing reserves on our bodies so that our organs would not freeze. Besides, it started to rain, which sucks while making stick bread and also during open air concerts. A fruit farmer had the spontaneous idea to convert his sales cart into a stage so that we at least stayed dry. The cart was almost perfect. Only in the height there could have been 3cm more in it. You could clamp the double bass so that it could stand without support. We were worried that the cold would keep our guests away. But the attraction of the Prophet is stronger than the attraction of the couch during rainy weather.

Every time we are in Benny’s homeland, the comparison with the Shire comes to mind. And also this time the exuberant atmosphere left no doubt that the Swabians can celebrate like the Hobbits. The campfire blazed until deep into the night and the instruments were 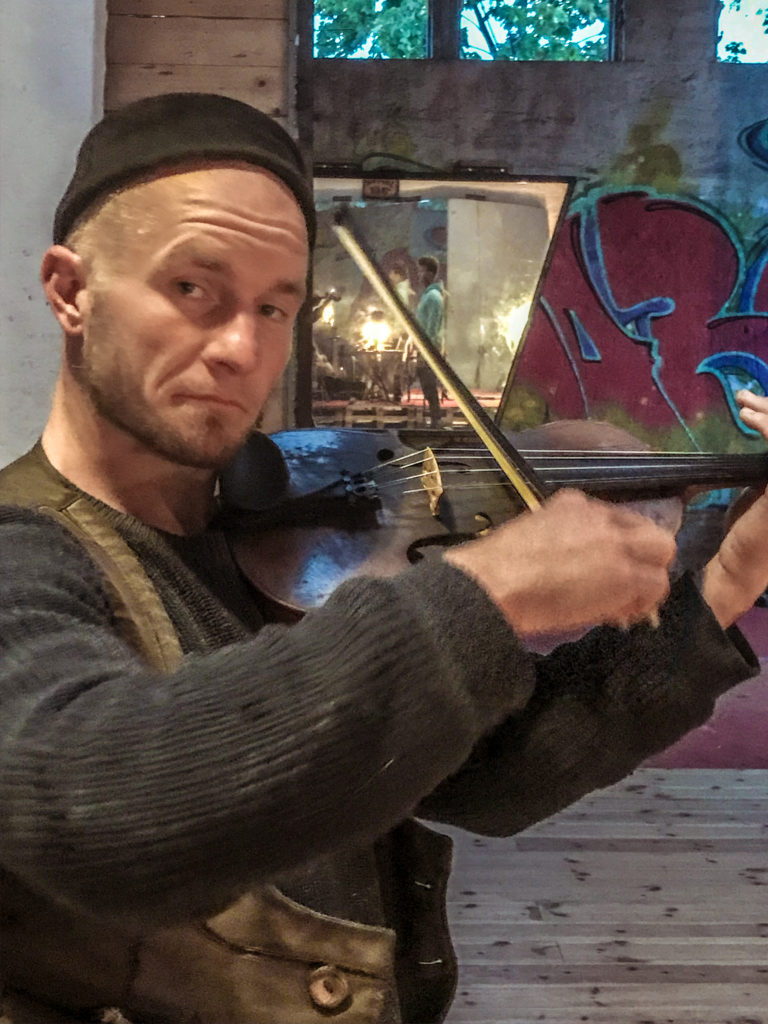 handed around until the fingers drunkenly slipped from the instruments. With a heavy heart we left the Shire the following day, the tour came to an end. With a long trip over the rainy highways of central Germany we reached Leipzig. At a car park Leo welcomed us with a delicious pumpkin soup. The roller-skate dance rehearsal room there was quickly converted into a concert hall. The rain on the tin roof demanded everything from our PA system, in situations like these it always shows how good it is that we have an experienced audio engineer with us. The concert was comfortable and successful. And in the glow of the fire barrel new plans were made and we said our farewells. And so the band members strolled out into the night to go their separate ways again.